Many of us have been affected by cancer in some shape or form. Whether you have survived cancer, currently undergoing treatment for cancer, known of someone (such as family or friend), it has impacted us all. However, it’s a topic that is frequently avoided in conversations. Cancer is ugly, tough, devastating, deadly; the description can go on and on. No one wants to talk about it but we need to, more than ever before.

Cancer doesn’t discriminate. It doesn’t care if you’re a hero or a bystander, old or young. It affects people who make poor choices (i.e. smoking) and people who try to live a healthy life. Your gender, race, or age doesn’t matter – it doesn’t care.

When I was young, I used to think cancer only happened to the “bad and unhealthy people”. Then my grandmother was diagnosed with lung cancer when I was 7. My first thought was why did she get it? She doesn’t smoke and she’s a wonderful soul. Why didn’t my neighbor get it instead? He smokes all the time! Fortunately for grandma, cancer was caught early, and she responded well to treatment. She has been in remission for over 18 years and still going strong. So then I thought cancer was only for old people.

Cancer robbed a dear family friend a few years later. He was a lively talented 17-year-old with a huge heart, excited to go to UW. His dreams were abruptly halted when he was diagnosed with an extremely rare and aggressive form of testicular cancer. Despite endless rounds of chemo that left him physically frail, his will to live was strong as ever. He refused to stop practicing his piano and violin until he was too weak to play. Rather than holding a self-pity party in his last days, he spent his precious energy consoling loved ones to not worry about him and described the huge celebration he’d have when he beat cancer. He passed away shortly after his 18th birthday. He would have been 33 this year.

While you and I know there is no magical simple cure to cancer, research and funding are getting us closer.

Relay For Life is a community-based fundraiser event that benefits American Cancer Society. It is a wonderful event to commemorate loved ones affected by cancer (pets included).

During the relay, each team will always have a member walking on the track to signify that cancer never sleeps. Patients with cancer never stop fighting because they are tired, and for one night, neither will we. We won’t sleep until cancer is beat. This event honors the lives taken by cancer and celebrates survivors, as well as the caregivers that makes this fight possible.

The funds raised will not only go towards cancer patient programs, but it will also go towards groundbreaking and life-saving research that will change those statistics. But we need your support to make this happen. (Did you know $100 could provide 10 FREE rides to and from treatment? To learn more about where your donations go, click here.)

I hope you will walk with HorizonView Health to join the fight and celebrate 15.5 million cancer survivors nationwide. (And if you can’t, would you consider making a donation instead?) 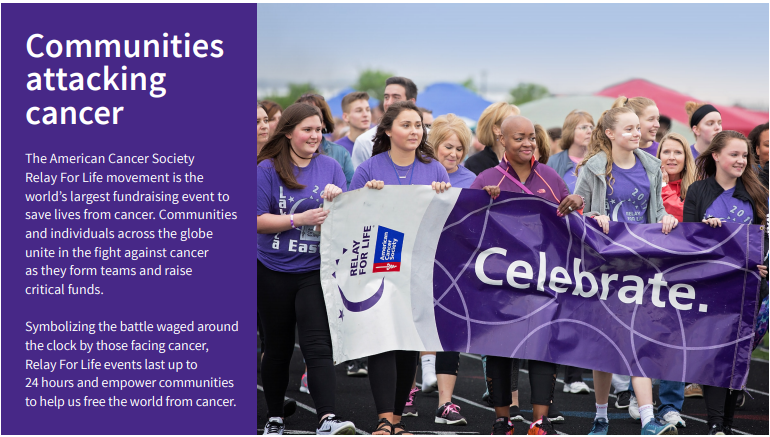 As we continue to monitor the rapidly evolving situation around COVID-19, we are making the safety and health of our patients and staff our top priority. Masks are required at all times while visiting our office. We ask that all patients limit the number of guests with them to one per patient. We appreciate your understanding as we navigate these challenging times.